Education has long been seen as the key to a fairer society, and it must now find ways to enthuse and engage low- and under achieving pupils.

While working to improve the lives of all young people, the biggest challenge continues to be that of Narrowing the Gap in opportunities and outcomes between the majority of learners, and those who are most vulnerable or underachieving.

Key findings of the Research:

The research literature review confirmed that:

Education has long been seen as the key to a fairer society, and it must now find ways to enthuse and engage low- and under achieving pupils.

While working to improve the lives of all young people, the biggest challenge continues to be that of Narrowing the Gap in opportunities and outcomes between the majority of learners, and those who are most vulnerable or underachieving.

We carried out a literature review which confirmed how important it is for learners to be fully engaged in the learning process. Through classroom observations and interviews with pupils and teachers we identified how technology can be effectively used to motivate and engage low and underachieving learners.

Here you will find the results of this research, and some detailed case studies explaining how technology can motivate and engage those achieving below their potential.

Literature review- the importance of engagement

This revealed that learners achieved their full potential only when they were fully engaged with the education process:

There are many reasons why some young people fail to benefit from education. A review of evidence revealed a complex mix of factors including basic intellectual and emotional capacities, socio-cultural background and the quality of the education environment. But it also confirmed that in order to achieve their potential, learners must first engage FOOTNOTE with the learning process.

The qualitative research that followed the literature review was designed to uncover the ways in which technology can be used to equip young people with the skills to participate in learning throughout their lives.

The central focus is identifying the teaching practices that can support low-achieving or underachieving learners. We wanted to know how technology can be used to help reduce the attainment gap between learners in school.

The research team worked with 8 teacher consultants from secondary schools across England that were effectively using technology for teaching and learning. These consultants were tasked with identifying effective teaching and learning practices, particularly those using technology. The research team visited the schools to observe these practices; they interviewed teachers, learners and members of senior management teams and held group discussions with teachers.

What are the characteristics associated with low and underachieving learners?

Drawing on the literature review 45 potential characteristics of low-achieving and underachieving students were identified. Both positive and negative descriptive labels were created. These 45 descriptors were presented to 21 practitioners, including senior managers and classroom teachers. The teachers were asked to specify whether each of the given characteristics described their personal concepts of low-achieving or underachieving students.

Both groups are characterised as easily influenced but more significantly as being bored and having a poor work ethic. However, there are also key characteristics ascribed to only one of the two target groups: low achievers have characteristics which present challenges to effective learning. Often identified as having specific learning difficulties, poor reading skills and problems of social integration, these students are perceived as having some measure of special educational needs. Of the two groups of learners, low achievers alone have positive characteristics such as ‘tries hard’ ascribed to them.

While low achievers and underachievers are perceived as sharing many characteristics, those assigned to underachievers only are largely behavioural and negative. These learners are distinguished by their below par performance and their disengagement from the learning process, at times manifested through poor attendance at school. Negative social characteristics such as disregard for others are also noted. However, it is equally important that some teachers recorded that these students are unchallenged by the educational process, suggesting that there is a need to do more to engage them.

What are the Gaps?

There are many types of ‘gaps’ that need to be narrowed, for example gaps in personal competencies, in opportunities to learn and in achievement.

A key message from schools is that learners must be ‘ready to learn’ before they can engage effectively with school. This resonates with the research literature, which shows that low achievers and underachievers have weak basic cognitive skills and are not prepared for the act of learning; that is, some children are ill-equipped for school. Technology is now being used to develop the social skills that are essential for a successful school experience, such as paying attention to teacher, taking turns with other pupils and building socio-emotional skills. The following commentaries describe how two research schools have responded:

A case study from this research:

David, who is diagnosed as being on the autistic spectrum, attends his local primary school. As an able boy his problems are not related to his thinking ability, but he has severe problems mixing with and relating to his peer group. As a result his peer group find it difficult to communicate with him and on the whole ignore him. He has been placed on a table of supportive peers but interaction is sparse and largely one-way: other pupils speak to David, but get little response.

The introduction of an interactive whiteboard (IWB) has facilitated interaction between David and his peers. David’s interaction with other children is minimal without the IWB but is at normal levels when he uses the IWB to explain his ideas.

Talking though the IWB moves the focus from ‘me’ to the ideas and this is a help to David. Equally David’s increased ability to respond results in more questions and comments flowing from his peers. In essence David and his peers meet in a shared safe space provided by the IWB, a space where the rules of interaction are less ambiguous and confusing for him.

Another case study from this research:

The cognitive resources that learners bring to their learning help to determine whether their learning experiences are fruitful or not. Many low and under achievers have weak basic cognitive skills: they are not prepared for the act of learning.

This lack of competence often leads to frustration and disaffection in school. However, these skills can be trained effectively and the results can be very positive not just the individual but for the class as a whole.

One West Midland school targets the ability to attend and listen. A 10 week, half-an-hour a day listening programme is provided – via computer – for those children who are finding it difficult to simply listen. The school reports improvements in listening skills, ability and confidence.

An ‘audiogram’ is computed for each child. The audiograms for one student are shown here. The grey zone shows normal performance. 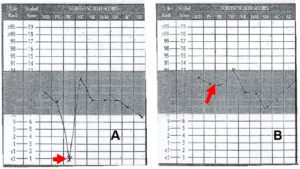 This simple case study suggests that training can ameliorate some seemingly intractable problems. Such training is a form of exercise for the brain. The listening programme here has been successfully used to reduce behaviours associated with ADHD. In such cases the programme trains children to inhibit their immediate response to any situation and to reflect before speaking or acting. The effectiveness of such cognitive training is well documented.

Providing digital feedback from teachers to parents is reducing absenteeism in a number of schools. In one 11-16 technology college they have had particular success. They swapped a paper-based system which focused on bad behaviour for a custom-built system which recorded both good and bad pupil behaviour based on 5 ‘levels’ of good and 5 ‘levels’ of bad behaviour. Parents are notified by email or post if their child is given a high score (3 or more) for either good or bad behaviour.  Pupils and parents also receive a weekly summary. Persistent absenteeism is a factor in academic underachievement; the use of digital feedback to parents has improved attendance.

At the end of year 10, the school identified underachieving pupils and designed a personalised programme of support for each. Every pupil was allocated a personal mentor and his or her progress was monitored throughout the year. This has allowed the school to increase its percentage of pupils attaining 5 GCSEs.

The detailed knowledge of each pupil provided by the new system allows teachers to produce a targeted programme of work for each pupil. Pupils receive quick notice about when things are going right or wrong. The first was motivating and the second helped individuals to correct mistakes and bad behaviour before they became too entrenched.

Many teachers cited that software such as MyMaths was something that they found valuable as it gives students immediate feedback on their performance.  Teachers used the facilities to vary the level of complexity of the work to provide more personalized learning. While students could complete a piece of work more than once, and would often do so, to improve their score as an element of self-competition and improvement.

The motivational power of technology is also clearly recognised by teachers:

Further outputs emerging from this research is a set of multimedia examples of good practice that hold promise for addressing the problems associated with the target learners. These have been developed to provide a range of teacher-support materials – these Virtual School materials can be found: http://policy.becta.org.uk/ and just click on either the picture or the link at the top of the page.

The full report and literature review can be found here:

Some questions for teachers to consider:

[1] Lucas and Claxton 2010, p23 :Readiness to learn: being emotionally and practically ready and willing to learn something and believing you can do it.