This report attempts to analyse the impact of an Internet based learning resource on pupil attainment in VOCATIONAL Business Studies.  I hope the research illustrates the potential of such a resource on pupil attainment and the interest it creates in the subject.  While this research surrounds only one school and two intake classes, it is hoped that the results can be used to help teachers of other subjects appreciate the role of Internet based learning technologies in Post-16 education.

The focus for this research are two Advanced Vocational Certificate of Education (VOCATIONAL) Business Studies classes – one in year 13 studying for their A2 (Cohort A in this report), and the other in year 12 studying for their A2 certificate (Cohort B in this report).  Both are similar in size (20 and 17) with near identical profiles (average GCSE score, male / female ratio, ethnicity, predicted attainment, attendance) and, when completing their two assignments, used the same coursework questions but with different companies.

Through completing this research, I hope to illustrate to other teachers in the school that time invested in transferring resources to the Internet can benefit both pupil and teacher and results can improve as a result.

The key research question I hope to address is: ‘Does the introduction of an Internet based learning resource have an impact on pupil attainment in VOCATIONAL Business Studies’.  To investigate beyond this key question, other questions that attempt to find more detail information about cause and effect.  The research will also look at:

The field for this research are two of my VOCATIONAL Business Studies classes in successive year groups at School XYZ.  They are following the same course with identical assignments – bar the company in focus – and have like profiles (Appendix 1).  To include classes beyond the school, with different teachers and different learning environments would prove problematic as they would not have received the same teaching inputs of these two groups.  The data was collected after May when all assignments had been submitted and an exam in January had been taken.  The interviews took place in the last two weeks of the summer term when pupils had finished the course and were waiting for exam grades.

In year 1, when cohort A started the course, I developed resources that would enthuse and develop the pupil both as a business and post-16 student.  Lessons were structured and followed a well-planned scheme of work.  Pupils were given an outline of the weeks that informed the topic for each week, where resources could be found and the deadlines for when tasks had to be handed in.  The coursework had been worked on over the summer break and each task followed specific assessment criteria from the examination board.  Pupils could recognise their own level of achievement through a weekly print out of their marked work and the tasks that were outstanding.

In year 2, cohort B had the same approach to teaching.  Similar to cohort A, I was their sole teacher for all four lessons per week.  The coursework was the same, albeit with another company as the focus.  However, although two different companies had been used, the opportunity to meet assessment requirements remained equal.  The principle difference between the two cohorts had been the development of Internet based resources.

Findings and Analysis of Results

Within the questionnaire (Appendix 6) the two cohorts were asked how often they accessed the website.  Cohort A – who had completed their AS studies without the website – are compared against Cohort B. 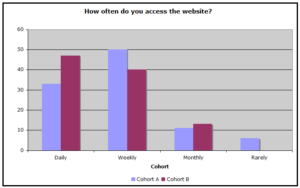 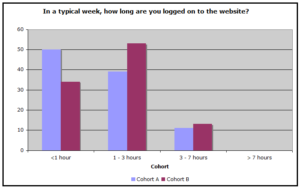 Between Cohort A and Cohort B, the planned use of the resource had changed and the following results from the questionnaire confirm this.  For Cohort A, the materials had been uploaded to the school network reflectively when they were in year 12.  When Cohort A moved in to year 13, resources were uploaded for the week ahead.  For Cohort B, however, all resources had been uploaded for the term at the beginning.  This allowed pupils to access the resources in anticipation of their learning and look at what they were going to learn that week. 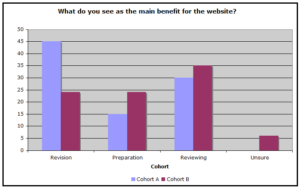 The results are promising and indicate a noticeable shift between the use for revision – for either coursework tasks or examined units – to preparation and reviewing.  Pupils were no longer using the site to look at previous work, but to prepare for future learning.  Is there a link between students on vocational courses forward planning to final course grade?  The literature review did not highlight research indicating this important factor, but further investigation would be needed and such recommendations will be discussed in the conclusion to this research. 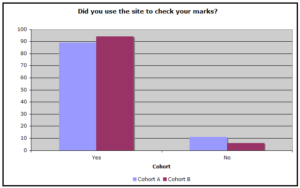 Cohort A had a slightly different questionnaire (Appendix 2) and one pupil made a interesting comment:

The site allowed me to check the work I had given in.  More or less on the same day as handing it in, I could go to the website and check the marks.  I could then go and improve the work and resubmit it.

The comment is promising and highlights that pupils began to realise how the review progress worked.  I could tell from the statistics from the site that pupils were accessing the register (Appendix 7).  For example, in April 2005, the year 12 VOCATIONAL Business file (Cohort B) was accessed 122 times, and the year 13 VOCATIONAL Business file (Cohort A) 95 times.

Of significant interest has been the impact on the lower achieving pupils in cohort B.  Prior to the resource, the minimum AS score was 117, the average 210.9 and the maximum 261.  Cohort B, however, had a minimum score of 172 (up 55 points), and average of 215 (up 3.1 points) and a maximum 251 (down 10).  The spread of marks (see graph below) illustrates how the two cohorts compare.  There is a clear shift in ability and final grade. 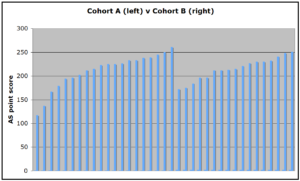 These results are promising and indicate that whole class achievement in VOCATIONAL Business Studies has improved.  Looking in detail at the three units further promotes development across all units.  In all units, the coursework projects were identical (using different companies) and the time given for each unit the same.  The results also show that minimum performance in all three units has improved.  There are four instances that require explanation in the results: where performance has actually decreased.

In Unit 1, the maximum grade decreased from 92 to 88.  The pupil in question for Cohort A who achieved 92 was an incredibly hard working individual who excelled in Business Studies.  Overall, he gained 261 out of 300 and eventually went on to gain an A grade at A2.  Such a result places him in the top 1% nationally.  He was also responsible for the second decrease in Unit 2 where the maximum grade decreased from 89 to 81.

The average grade for unit 3 was the third instance where results actually decreased on average from 73.7 to 71.4.  The fall is unjustified as both groups had the same time for the unit.  However, in closer analysis, Cohort A benefited from seven individuals gaining 84 or higher whereas Cohort B only had four individuals.  It appears that individuals in Cohort A had greater capacity for gaining high coursework marks in assignments.

The final decrease in marks was for the total grade for AS where Cohort A gained 261 and Cohort B only 251.  The individual responsible for the first two drops discussed is the student in question.  If this student from Cohort A had not been included, then all unit marks would have seen an increase.

ALIS (A Level Information Service) predictions allow teachers to gain an indication of potential pupil performance based on GCSE point scores and their ability in a cognitive examination.  Teachers at School XYZ are given ALIS predictions in November as a guide for pupil attainment at AS and A2. 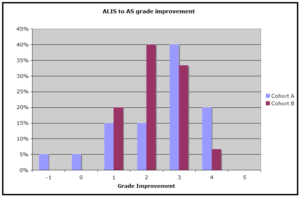 The average grade improvement for Cohort A was 2.3, for Cohort B, 2.5, indicating that pupils in Cohort B performed better than Cohort A when considering their anticipated attainment.  Cohort A had two pupils who either gained grades lower or equivalent to their predicted grade.  The majority of Cohort A either gained a grade three or four higher than prediction, whereas Cohort B were at two or three. Such analysis further supports the notion that the resource helps the lower achieving pupil more than the higher achieving pupil.  The weakness to this final piece of data is that the grade improvements – when assessed by the school – are analysed as whole units and not as percentage increase.

It is important to recognise any prior learning that each cohort has in order to eliminate such impact on the results at AS.  In Cohort A, six pupils took the GNVQ Intermediate Business Studies course compared to only two in Cohort B.  The course is idea preparation for the VOCATIONAL and covers subject content at Intermediate rather than Advanced level.  It is difficult to assess how much of an impact the course has had directly, but useful to analyse.

Overall, the results suggest that the introduction of the Internet resource has had a positive impact on pupil performance in VOCATIONAL Business Studies at School XYZ.

The development of Internet based learning should not be limited to Key Stage 5 learning.  The process should be set in place from Key Stage 3 to allow pupils sufficient time to adopt the skills and maturity to autonomously access the materials out of school.  If pupils become well rehearsed in taking an active role in their learning then teachers need to realise the time involved in developing such resources.  There are, however, other pressures on teachers that restrict the opportunity to devote time to such projects.

This research can help to contribute to the knowledge base that exists for the impact of technology in education, specifically, Internet based resources.  The research will be disseminated to all Heads of Department in the school and the Senior Management team in an effort to introduce whole school participation in the system.  The results can also act as a stimulus to continue charting impact on learning from any new technology introduced.  The school has recently invested in thirty interactive whiteboards, a networked teacher PC in every room and video conferencing facilities.  All have been purchased with an attempt to improve the teaching and learning at the school and, although measuring the impact may be problematic, small scale research that is based predominantly on teacher and pupil interviews could be conducted.

Looking at the first question, through the research and analysis of data for this study, evidence would suggest that the provision of an online resource does benefit post 16 vocational students.  The answer to the second question is less clear however.  Students prior achievement in subjects not directly related to the course, seemed to have little impact on final AS grade through implementation of the system.  The third and final question requires careful consideration and attention, perhaps even a report in itself.  One tentative recommendation is that the supplier of the resource needs to give adequate time and attention to the needs of the end user to prepare materials that will be accessed and used by the pupils.